Republican-leaning parts of the country have been hit hardest by Joe Biden’s inflation while those in more liberal cities are seeing less-drastic price increases under Biden.

The Consumer Price Index released shocking new data revealing that “out of the more than one dozen metropolitan areas the Bureau of Labor Statistics monitored over the past year, residents in the Atlanta metro area faced the worst inflation increases, with the cost of goods costing 7.9 percent more than they were last year.”

“The sharpest increase for Atlanta-area residents came in the cost of transportation, as they paid 21 percent more for fuel and vehicles than they were a year ago,” according to Bloomberg.

“Those living in the San Francisco Bay Area, though, only saw their prices rise 3.8 percent, and in the New York metropolitan area prices only went up 4.3 percent. The figures represent a change in demographics during the COVID pandemic, as people moved out of the larger liberal cities and into cities in more conservative states,” the report added.

“Cities in Arizona also saw large increases in the price of goods over the past year – at 7.1 percent – and in St. Louis, Missouri, prices of everyday goods rose 7.5 percent. Each of those metropolitan areas – in more conservative states – faced worse inflation than the national average – at 6.2 percent, the highest it has been in over 30 years,” the report continued. 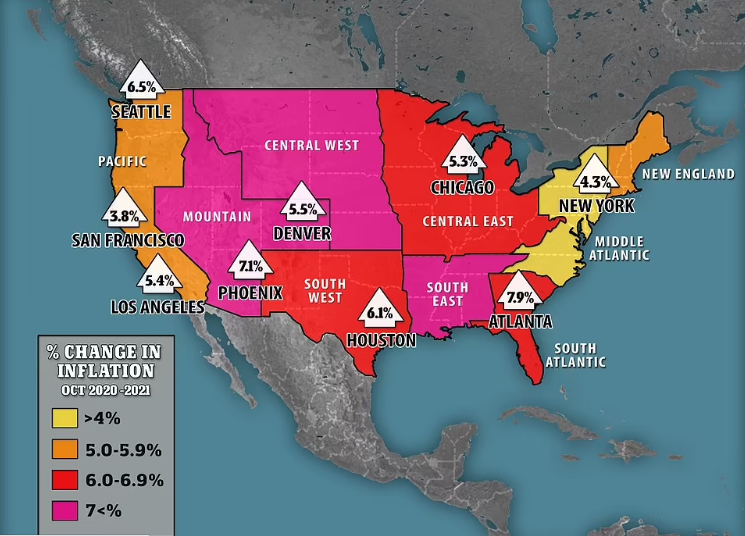 Inflation has gotten so bad that CNN published a report this week titled, “Why inflation is a political nightmare for Biden.”

“Joe Biden’s next political nightmare is inflation, a force that can destroy family budgets and political careers and is being driven by domestic and global factors tough for a president to quickly fix,” CNN reported.

“Government data showing the cost of living rose 6.2% over the last 12 months — the highest rate in 30 years — set off White House alarm bells on Wednesday and offered a new opening for Republicans lambasting Biden over high energy prices. The figures underscored what all Americans already know. Every trip to the supermarket shows that basic foods like eggs or meat are shooting up in price. The gallon of gas it takes to get to the weekly grocery run is currently averaging $3.40 nationwide. Such pain in the pocket, coming off a demoralizing pandemic that is nearly two years old, threatens Biden’s already weakened political standing as he battles a corrosive political issue affecting voters every day,” CNN added.

“The White House has sometimes been slow to respond to flashing red political warnings — for instance, over immigration. But there were clear signs of a shift in tone on Wednesday after officials spent months insisting that higher prices were merely a transitory byproduct of the pandemic. Biden first issued a statement saying he would work to bring prices down. Then in a trip to the Port of Baltimore to tout his newly passed bipartisan infrastructure bill, the President went out of the way to show he cared and understood the issue,” the report continued.

The report continued: “Rising prices in the shops and higher home heating costs threaten to cast a pall over the holiday season and make the coming winter more expensive for Americans. A less important, but still significant effect of inflation is how it will weigh on Biden and Democrats heading into midterm elections next year.”