One of former President Donald Trump’s most endearing traits is that he constantly made himself available to the Washington Press Corps, even though most mainstream media outlets savaged him throughout his presidency.

But that is a marked change from his successor, President Joe Biden: A new analysis has found that “hidin’ Biden” has held far fewer press conferences than his five predecessors over the same period of time they were in office.

Nearing his first full year in office, President Biden has conducted fewer news conferences than any of his five immediate predecessors at the same point in their time in the White House and has given fewer media interviews than six of them did, according to a story on Sunday.

The president has done 22 interviews with the media and held nine formal news conferences – six solo and three with visiting foreign leaders – an analysis by Martha Joynt Kumar, a professor at Town University and director of the White House Transition Project, found, the Associated Press reported.

The late President Ronald Reagan, known as “The Great Communicator,” held fewer pressers than Biden did during his first year in office because events were scaled back after he was nearly assassinated by John Hinckley Jr. in March 1981, just a few months after he was sworn in. Reagan did 59 interviews in 1981, the analysis shows. 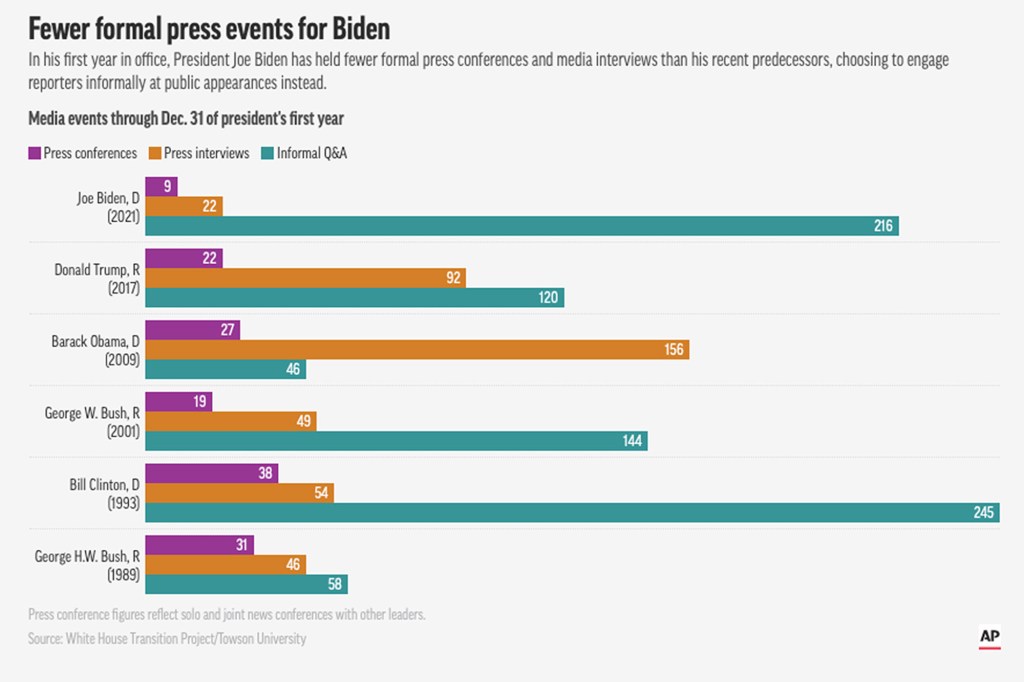 Former President Donald Trump gave 92 interviews during his first year in office, and while most were with Fox News, he also sat for interviews with The Associated Press, Reuters, ABC News, and The New York Times, all of which claimed — falsely — that he “colluded” with Russia to win his election against Democratic nominee Hillary Clinton.

Biden, meanwhile, has given just three print interviews and 22 media interviews in all that “included one-on-one exchanges with reporters at the three major television networks, two CNN town halls, an appearance on MSNBC and three with regional television stations via Zoom, along with conversations with late night host Jimmy Fallon and ESPN’s Sage Steele,” The Post reported.

The analysis also found, however, that Biden more frequently takes questions during public appearances than did his predecessors, mostly pausing to answer queries from reporters before hopping aboard Marine One or when he’s coming to or leaving the White House and during photo ops.

But in those instances, he is not subject to “robust questioning,” The Post noted.

“While President Biden has taken questions more often at his events than his predecessors, he spends less time doing so,” Kumar ​told the AP. “He provides short answers with few follow-ups when he takes questions at the end of a previously scheduled speech.”​

The White House Correspondents’ Association has pressed the administration to make Biden more available for interviews and such, but so far, those pleas have fallen on deaf ears. But Biden’s lack of media exposure also feeds into the perception that he is not mentally fit enough to endure question-and-answer sessions, as Breitbart News notes:

The 46th president has held just nine formal news conferences — six solo and three jointly with visiting foreign leaders – drawing accusations that fleeing scrutiny shines a light on Biden’s inability to grasp the detail required for the highest office in the land.

A plurality of registered voters think President Joe Biden is not “mentally fit,” while only 40 percent believe he “is in good health,” a Politico/Morning Consult poll revealed Wednesday. https://t.co/mFcA4zNUAG

“The more formal the exchange with the press, the more the public is apt to learn about what’s on the man’s mind,” he said.

Jon DoughertyJanuary 9, 2022
21,333
TRENDING
Advertisement
Back to top button
Close
Send this to a friend