President Donald Trump is making another major push to not only secure re-election, but to add more measures to juice the U.S. economy.

The president is promising to abolish the payroll tax if re-elected in November, saying he would protect Social Security by taking money from the Treasury’s general fund to pay for it.

Officials say the measure would apply to salaries up to $104,000, would means an average $1,200 wage increase over four months from September.

Over the weekend, the president was discussing the idea as part of a coronavirus stimulus package, announcing a payroll tax holiday that would leave as much as $100 billion in workers’ pockets, a cut he said he planned to make permanent, the Washington Examiner reported.

Trump spoke about this again on Wednesday while speaking to the media during a White House press briefing.

“At the end of the year, the assumption that I win, I’m going to terminate the payroll tax, which is another thing that some of the great economists would like to see done,” he said.

“We’ll be paying into Social Security through the general fund, and it works out very nicely,” he said.

“If Biden would win, he wouldn’t do that because he’s going to double and triple everybody’s taxes,” he added.

Trump: We’ll be terminating the payroll tax after I hopefully get elected pic.twitter.com/sCHCyUw7Dr

Before Democrats attack the president over this, it’s important to remember that many of them previously supported this when former President Barack Obama favored the idea.

Back in 2011, New York Democratic Sen. Chuck Schumer tweeted that if you were stalling a payroll tax cut, you were “putting politics before recovery.”

Joe Biden, who personally negotiated Obama’s payroll tax cut legislation, repeatedly extolled the benefits of a payroll tax cut, writing in a 2011 op-ed that it was “just plain wrong” that it would threaten Social Security. 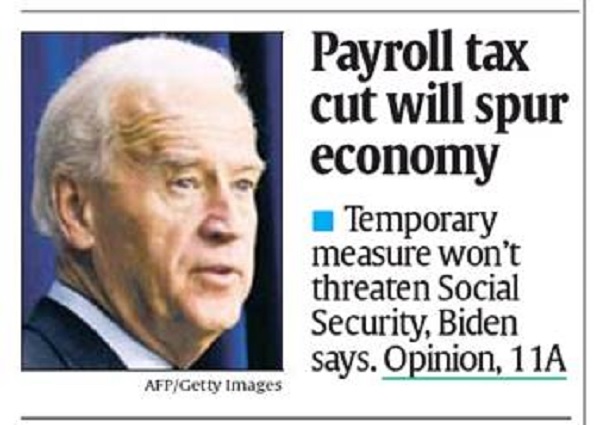 Trump has made it abundantly clear that he will protect Social Security and work to ensure Americans are able to keep more of their hard-earned dollars.

Democrats are already attacking him for this idea, but it’s clear they are total hypocrites.

When Obama proposed the idea, they supported it.

When Trump proposes doing the exact same thing — which Democrats supported — the Left goes nuts over it.