Fox News host Tucker Carlson went after socialist New York Rep. Alexandria Ocasio-Cortez on Monday night and he did not mince his words.

During a segment on his Fox program, “Tucker Carlson Tonight,” he shredded AOC for her tweet celebrating the crashing of the oil industry, telling the former “Sandy Ocasio” to “Go back to Westchester, you entitled moron.” 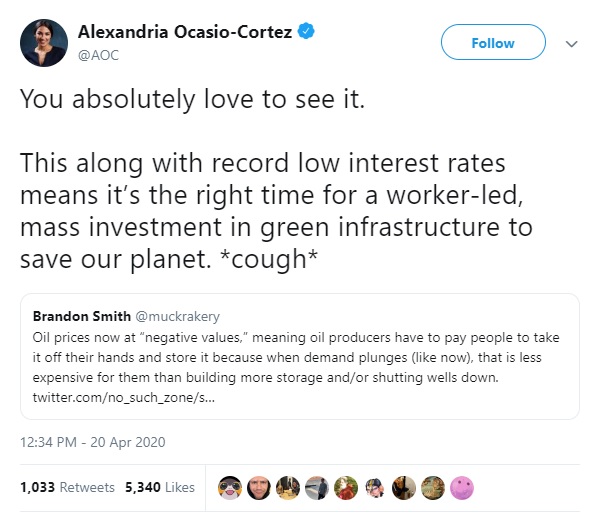 “‘You love to see it.’ Love to see what?” Carlson responded.

“Blue-collar America taking another kick to the face? Ocasio-Cortez soon realized she had been too honest, so she deleted the tweet, but it was too late, she’d been exposed for who she really is. Note the silly aside about ‘worker-led investments.’ Please. Spare us Sandy from suburbia. When almost ten actual workers were suffering, you clapped your hands and laughed at them,” he said.

Tucker Carlson says AOC is a child of privilege pic.twitter.com/4sx74Sgtms

While speaking about the coronavirus pandemic and Congress trying to pass another relief bill to help struggling Americans and businesses, Ocasio-Cortez suggested giving $2,000 per household plus $1,000 per child to each family in America.

“We have to make sure that we demand meaningful change and meaningful assistance for working families. That means $2,000 a month plus $1,000 for your kids, recurring.”

“When we talk about the solutions that Congress needs to have moving forward, I just think it’s important for us to say that incrementalism is not helpful in this moment,” Ocasio-Cortez said.

The issue here is AOC is calling for “recurring” payments from Congress.

American families and businesses do need immediate help but giving out at least $2,000 a month to every American for an undetermined amount of time is a socialist dream that would make people reliant on the federal government.

Many would have no incentive to work again if they can make at least $2,000 a month to stay at home. If they have kids, people could get a $4,000 check each month with two kids.

This would greatly harm businesses and incentivize people not to work given many would make more money to stay at home than to actually go to work.

Why would anyone take an entry-level job when they can make more than that just by having a few extra babies.

Can you imagine how many kids people would have just to jack up their monthly income number?

A guaranteed income based on family size is also a very “soviet” type idea.